Last month, I surprised my little sister for her college graduation (I also surprised my mom, whose jaw dropped hilariously when she saw me). I repeatedly told them I was not able to fly down to Texas, and then I took a cheap red-eye for a day trip that was totally worth it. 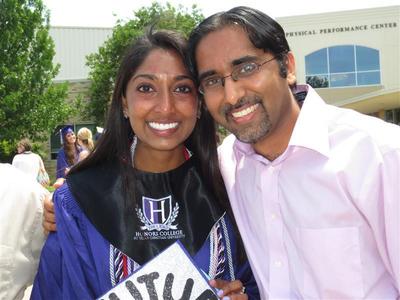 "WHAT ARE YOU DOING HERE??" she cried upon seeing me. And then she really cried. Special thanks to my brother and sister-in-law for their assistance. Jigna's friend, Victoria, could not believe my sister was so surprised because this is what our family does. Lies and deceit in the name of surprising joy! Those are the Patel words. Not as catchy as "Winter is coming," but we're working on it. 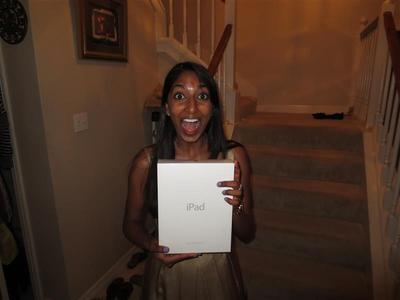 Also, I bought her an iPad. For dental school! To be academic and stuff! Instead she has been using it to fuck with awful guys on a dating app.


The Devil in the White City: Murder, Magic, and Madness at the Fair That Changed America, by Erik Larson, is one of those books that EVERYONE has read. I've been hearing about it for years, so I was excited to get it as a Christmas present.

The premise is simple and intriguing: Erik Larson follows the paths of two men in Gilded Age Chicago: Daniel Burnham, the architect behind the 1893 World's Fair, and H.H. Holmes, the architect behind a series of murders during said fair. And as in the best popular non-fiction, he constructs a narrative as compelling and readable as in any novel.

Unsurprisingly, the serial killer story gripped me more than the urban planning story. Larson deftly conveys much through implication: he never comes out and says when, exactly, Holmes's murderous career began, but he presents the strong evidence that everywhere he goes, people mysteriously disappear. It's unsettling and creepy the way that Larson allows the portrait of a serial killer to be painted by the facts themselves, although he is influenced by his own view of Holmes and the psychology of psychopaths in general.

That being said, the story of how the World's Fair came to be is exciting as well, as we get a picture of high society, Chicago, and America at that time. Various men vie for power and spend obscene amounts of money—Larson seems to enjoy presenting the ridiculous menus at some of their meetings—and crow about how IT CAN'T BE DONE even though we know it can and was. What was most fascinating to me was how much influence the World's Fair had. So many firsts! Larson delights in presenting interesting cameos of soon-to-be-important figures who either attended the fair or were involved tangentially. It's like a love letter to this amazing event in American history.

It is both a strength and a weakness that Larson doesn't go out of his way to connect his two stories (one can only manipulate history so much, after all). For the most part, the chapters function fairly independently, and you could read the Burnham chapters alone or the Holmes chapters alone and get two interesting books. I appreciated that he allowed their stories to speak for themselves and let the juxtaposition do its own work: during a celebration of everything that makes America and the world great, one man killed dozens of women AND NO ONE FUCKING NOTICED. Larson doesn't have to make a point about the culture of excess; it's already there. In fact, by not explicitly linking the stories and explaining his own reasoning for choosing to tell them simultaneously, he forces the reader to make the links himself, quite likely seeing comparisons and contrasts he didn't even see himself.

It is also both a strength and a weakness that Larson does use a fair bit of supposition and embellishment in his writing. Although it makes the book read like fiction, it...makes the book read like fiction. He frequently tells us what people are thinking or seeing when he couldn't possibly know; however, he does cite his extensive sources and justifies some of his interpretations in the footnotes. It took me some time to adjust to the style, but once I accepted that there was a thin veneer of writerliness coating the facts, I enjoyed it, especially because Larson is a good, evocative writer, even if he does seem very focused on the color of people's eyes.

I rarely read non-fiction, so I love when I can learn interesting facts in the context of a rollicking story rather than Wikipedia. The Devil in the White City makes me want to check out some of the other non-fiction books on my ever-growing to-read List.
Collapse