Well, that's what comes after Asilomar 5.

So you're back from another one of your medical writing conferences?

That I am, Gerald. And I don't have a lot to say about it since I'm so damn busy.

Well, it was probably a nice vacation, right?

It was! I spent most of it reading Old Man's War and Homeland and watching Fullmetal Alchemist: Brotherhood and The West Wing.

All right, so just give me the good stuff. You know what I'm talking about.

Look, Gerald, the organization is predominantly women and it also skews old, so it is statistically likely that if I choose to spend time with the younger crowd, they will be young women.

And there was probably no one else there even close to your age.

IT'S TRUE. We'll call her Ahiru. She's a British graduate student at the University of Zurich about to get her PhD in virology, and she lives somewhere near Russian River with her husband. She totally called the keynote speaker on her virology. She was a newbie exploring the field—there are always a couple at every conference—and I intended to introduce her to Jimmy Pop—who now works with me, did you know that?—but he never showed up. I also talked a lot with Trumpi, a Polish woman who claimed to subsist entirely on ice cream and chocolate. She was a hoot, and I was not surprised when she won the Asilomar Award for Superior Social Facilitation.

What was the skit this year?

It was Les Pathetiques, a pretty clever parody of Les Miserables with beautifully specific lyrics about medical writing. I was not familiar with the show at all, but I sang a parody of "Castle on a Cloud" called "Project on the Cloud." Wearing this: 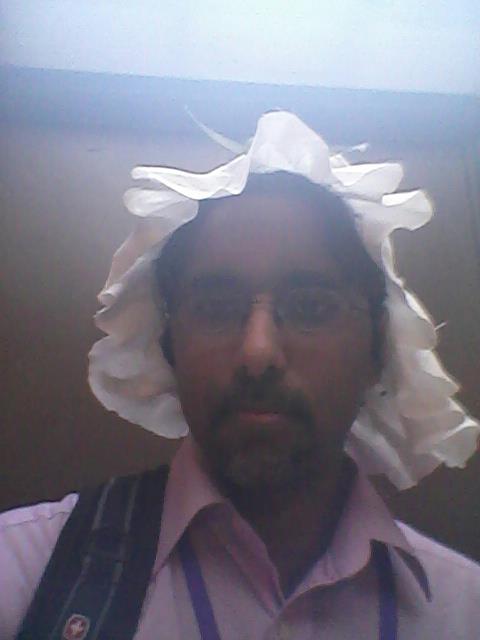 You look quite fetching.

Well, I am sure you sang well and people told you you were soooooo talented, you egomaniac.

Well, did you learn anything at all at this conference?

I did! I learned a lot of cool Word tricks this morning. That would have helped me during the interminable review cycle of my last safety narrative template, but...at least I know the Word secrets for next time.

Wow. I think I fell asleep before the first punctuation mark.

That's it, no ice cream and chocolate for you.
Collapse