Does anyone remember my Oakland Art and Soul Festival report from last year? I thought it was one of the cleverest ideas I ever had, and no one noticed. You totally lose. And you're still not listening to the Silversun Pickups, are you? I'll have to do something about that. But later.

This year, I got

harriettheelf to accompany me, which was one change. Also, they raised the price to TEN DOLLARS. Geez. Paying out the ass here. I miss the halcyon days of yesteryear, when one got in for a mere five bucks.

Rachel missed Audrye Sessions, a local band I had not actually heard or seen before but I knew was championed by Live105, as they had headlined the Local Lounge at BFD. The first song started out pretty good, and then it got to the chorus, which is when it rocked. Go here and listen to "Perfect Sometimes." Do it, dammit! Have you no faith in me? It's a really good song. I don't know how to describe rock music, dammit. Their set was musically interesting and catchy; the vocals are...Britrock-y? I DON'T KNOW. JUST LISTEN. I didn't buy the CD because it was $15, although the merch guy did say there were, like, 24 goddamn tracks on it. And now I found out it's a limited pressing. So maybe I should have gotten it. Perhaps I will get another chance.

Now, another reason I enjoyed the Audrye Sessions set is because they had a hot female bassist. Observe! 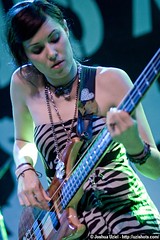 There is something ridiculously sexy about watching a woman lean back and pluck that bass. Maybe it's something about nimble fingers. When Rachel saw her, she complimented my taste in women.

Later on, I caught her at the merch table and told her they had a good set, I hadn't seen them before, etc. She asked my name and gave hers as Alicia and shook my hand. I touched her! Local bands are so personable. It turned out they lived, like, on the same street as the Lovemakers, and she also liked Honeycut. Oakland band power!

Listen to Audrye Sessions. Check out "The Paper Face"; they played that too.

Rachel and I walked apace as we grabbed lunch from Popeye's and a middle Eastern kiosk, counterrespectively. We made it back as the Lovemakers were starting their set. I had never heard of the Lovemakers before BFD, but down at Shoreline, I really enjoyed them, and I had "Shake That Ass" stuck in my head for days afterward. I thought of them as sort of Shiny Toy Guns-lite, but Rachel was reminded of the New Pornographers. They're more electronica-influenced than New Pornographers, though. The common thread for all these bands is the presence of both a male and female vocalist. The Lovemakers are very fun and dance-y (hell, they do have a song called "Dance" in addition to "We Should Be Taking Our Clothes Off"). You need to go here and listen to "Misery Loves Company." It's terribly catchy.

The set was entertaining because Lisa clearly wasn't wearing a bra, which meant her boobs bounced up and down as she jumped up and down. Also, she poured water on herself during the last song. I assure you that it was not solely to be provocative; it was also really hot. Her bandmate said his feet felt like they were on fire.

Between sets, Rachel recognized Lisa from the back from her grey pants, so we went over to say hi. We told her they had a great set, and I gave my spiel about seeing them at BFD and getting "Shake That Ass" stuck in my head. Rachel added, "It's very stick-y." As we left, a bunch of little girls came over to get her to sign stuff, including a shoe. Rachel thought it was adorable.

Before I left, I decided to pick up their first CD, Times of Romance, from the merch table. I knew it had "Shake That Ass" on it, but I was delighted to discover, upon opening it at home, that the other song I was getting stuck in my head after the set was also on it: "Set Me Free."

Listen to the Lovemakers. (Hey, I hate MySpace as much as the next guy over the age of fifteen, but I admit it's great for promoting bands.)

Rachel had to miss out on an artist that she had, like, lived in the same building with in order to see Great Northern with me. Luckily, I believe she thought it was worth it. I only knew one song by them, "Home" (if you're feeling ethical, download it for free from here), but it was a really great song. It's just gorgeous and lovely. The first two songs of the set proved that wasn't their only good song. It's sometimes hard to warm up to a band live if you don't know the songs they're playing since it's hard to hear the subtleties of everything like you could hear on a studio track, but there are certain moments that just get you (the chorus of "Perfect Sometimes," as I described earlier, for instance) and make you pay attention to this band. Go here and listen to "Telling Lies." The chorus there had a similar effect. The female vocalist has a lovely voice, and the male vocalist provides a good harmony (he didn't sound as good live). The music is kind of light and mellow rock with a touch of synth. Just listen.

The live version of "Home" was a little different, with the guy doing a different note on the "high" and, rather than just the woman singing the chorus, it was both of them harmonizing on "it's something less than a holiday" (which had slightly different notes), and it was really really cool. I want them to record a live version, too.

The set was entertaining because during one song, the female vocalist was also drumming with what looked like a makeshift drumstick held together with red tape. And it broke in about five seconds. Someone brought her a regular drumstick, but it wasn't as effective. In addition, Great Northern was also blessed with a hot female bassist. Observe the dark-haired woman next to the redhead:

Rachel was quite enamored with her. I did not get to talk to her or touch her, though. (Here is a better picture.)

Awesomely, after the set, there were dozens of people asking about Great Northern merch; Rachel and I weren't the only ones who were impressed. Unfortunately, they weren't selling CDs for some reason, so I ordered it from Amazon when I got home.

Listen to Great Northern. Check out "The Middle."

On my BART ride home, I shared a train with an Indian girl (Berkeley student, probably too young for me) who had watched seasons 1 and 2 of The Office "like thirty times." They exist! With good taste in television!

Hope you all enjoy the music I have provided for you today. If you don't, you are wrong.
Collapse